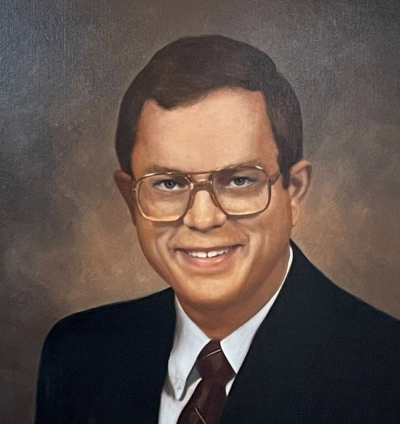 Charles E. Schelin was born in Richmond, Virginia on August 22, 1940. He received a Bachelor of Science degree in Business Management at Virginia Polytechnic Institute and State University in 1963. He served as a Captain in the U.S. Army from 1963 to 1967. From 1967 until 1970, he worked as a real estate broker in Richmond. He came to Russell County after graduating from Richmond’s Law School in 1973.

Chuck started his law practice with the law firm of Griffith and Bondurant in Lebanon. After Brantley Griffith’s death in 1974, and T. Jack Bondurant’s acceptance of the General District Court Judgeship in Russell County, he merged his law practice with the Abingdon firm of Moore, Browning and Morefield. From 1975 until 1983, Chuck was resident partner in Lebanon where he maintained a general practice representing Russell County residents in business, domestic, criminal, and auto accident cases. During that period, he served as a director of the Russell County Medical Center, Town Attorney for Lebanon, President of the Russell County Bar Association, and Russell County Representative on the Attorney Ethics Committee.

From 1983 to 1985 he limited most of his practice to representing those injured in automobile accidents or from negligent actions of others. During, those two years, he spent considerable time in the courts of Tazewell, Buchanan, Washington, and Dickenson counties as well as Russell.

In 1987, Chuck and Jim Arrington along with Greg Herrell formed a firm to represent the injured and disabled people of Southwest Virginia. Greg retired in 2016.

Chuck died in a private airplane crash on June 9th, 1989. He was the pilot and there were no passengers. Chuck’s name has remained on the firm as he was loved and respected by all of those who worked with him.

“I came to Arrington Schelin for help and they provided it and so much more.”

“Very knowledgeable law firm that keeps their client informed and always willing to let you come in to talk to them.”

“They kept us informed and pleasant to talk with... Took lots of stress from us.”